Getting Started with Siri

Use Siri on your iPhone, iPad, or iPod touch

Learn how to use Siri, the intelligent personal assistant that helps you get things done. Siri can send your messages, place calls, check your calendar, and more.

Go to Settings > General > Siri and make sure that Siri is turned on. You’ll need an Internet connection through Wi-Fi or cellular data.

You can ask Siri to find directions, answer questions, send messages, and much more. There are several ways to talk to Siri:

Use the Home button

Hold down the Home button until Siri asks, “What can I help you with?” Then say what you need.

Plug your device into power and say, “Hey Siri.” Then ask your question.

With iPhone 6s, iPhone 6s Plus, iPhone SE, and iPad Pro (9.7-inch) you can use “Hey Siri” without plugging into power. Learn more about “Hey Siri,” like how to set up the feature.

Talk to Siri with your headset

If you’re using a headset that has a remote, hold down the center button or call button until you hear a chime. Then say what you need.

Talk to Siri in your car

If your vehicle supports CarPlay or Siri Eyes Free, hold down the voice-command button on your steering wheel, then tell Siri what you need. Siri waits for you to stop talking. If you have a touch screen with CarPlay, you can also use Siri by pressing and holding the Home key on the screen. You can tap the audio-wave button to tell Siri you’re done talking. This is useful if Siri can’t hear you because there’s background noise. Opening certain apps like Phone or Messages can also connect you to Siri.

Siri adapts its behavior depending on how you’re connected. For example, if you’re connected from a wired or Bluetooth headset, from Siri Eyes Free, or from CarPlay, Siri reads your messages so you can approve them before sending.

Since Siri uses Location Services to track places like your location, home, or workplace, you can ask for help based on location:

Information about your location isn’t tracked or stored outside of your iPhone.

Turn “Hey Siri” on or off and personalize the feature

To ask questions without pressing the Home button, plug your device into power and turn on “Hey Siri.” With iPhone 6s, iPhone 6s Plus, iPhone SE, and iPad Pro (9.7-inch) you can use this feature without plugging into power.

You can turn off “Hey Siri” in Settings > General > Siri. If you have an iPhone with iOS 9 or later, you can also temporarily disable “Hey Siri” by setting your device face down.

*Information about your voice isn’t tracked or stored outside of your iOS device. You can remove this information from your device by turning off “Hey Siri.”

You can use Siri in any country, with any of the supported languages. Since Siri is designed to recognize accents and dialects of the supported countries, Siri’s accuracy rate will be highest for native speakers. Learn which Siri features are supported in which countries.

Get help with Siri

If Siri isn’t available, or doesn’t understand or respond to questions

Before you try these steps, make sure that your device works with Siri. After each step, see if Siri is working.

Siri will also chime when you use “Hey Siri” on a device with iOS 9. 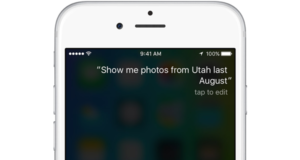